Killegy Chapel and Graveyard lies just off the busy Ring of Kerry Road in the Muckross area of Killarney National Park. It is the burial site of some notable names associated with Muckross over the years including Henry Arthur Herbert and Arthur Rose Vincent. Also enclosed within a circle of trees on the low hill of Killegy is a ruined mortuary chapel and a magnificent Celtic Cross that proudly overlooks Muckross and the National Park.

Killegy is located approximately 4km from Killarney town on the main N71 road towards Kenmare. 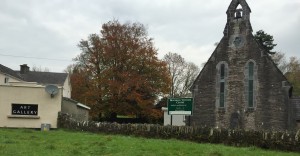 The access point is located just before the Muckross Park Hotel, about 1km from the main vehicular entrance to Muckross House and Traditional Farms.

If you are driving, the best place to park is near the ‘Blue Pool’ art gallery at the site of the old Muckross Post Office. The Muckross Youth Venture Centre is located next door. This former Church of Ireland building was converted to a youth centre in more recent years.

If you have small children or a dog with you, be aware that there is a stile gate at the start of the laneway. You will have to carry the child or dog over this stile. There is a lot of uneven ground in the graveyard itself so be careful where you step. 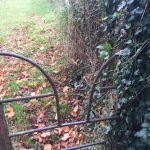 From the Blue Pool art gallery, make your way towards a grassy laneway between the houses. It feels like you are going into someone’s back yard here but rest assured it is a public path! The gate guarding the pathway to Killegy is usually locked so you will have to use the stile to continue on the path. 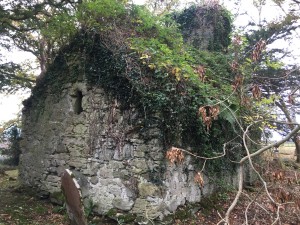 The graveyard is enclosed by a circle of trees giving the place a gloomy feel that is fitting for a graveyard. The ivy covered mortuary chapel in the centre of the graveyard is crumbing in parts but is quite solid and dry on the inside. The chapel is from the 18th century and was reconstructed on the site of an early building dating from the 12th century. The eerie interior can be accessed via a low doorway and is illuminated by small windows high on the chapel walls. The inscription on the wall of the chapel continues the macabre theme with references to midnight burials!

“This church of Killegy was built as a family mortuary chapel by Maurice Hussey of Cahernane Late Colonel in the army of King James II at his death in 1714. His body was borne here by his 4 sons and buried at midnight by torchlight.” 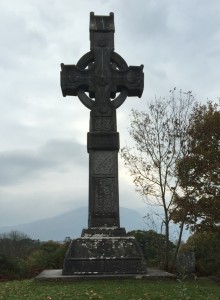 “In affection and memory of the right honorable Henry Arthur Herbert, Born 1815 Died 1866. His tenantry have erected this cross to record their sense of his virtue and their grief for his loss”

The cross is perched at the brow of the hill and has wonderful views of Muckross and the mountains of Torc and the McGillycuddy Reeks beyond.

Other notable names on the gravestones in Killegy include Arthur Rose Vincent (1876-1956). Along with his parents in law, Vincent donated Muckross House and the Estate to the Irish government in 1932.It was said at the time of his death that Vincent wanted to be buried standing up so that he could look out over Muckross from his resting place. An alternative interpretation of this wish was to ensure no money fell from his pockets! The ashes of his son, Arthur William Bourn Vincent (Billy Vincent) were scattered at a grave in Killegy in 2013. Rudolf Erich Raspe, author of The Adventures of Baron Munchausen is also buried here in an umarked grave.

In a Country Churchyard 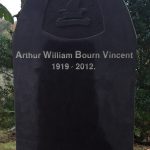 A little bit of the history of Killarney National Park lies within the circle of trees at Killegy graveyard. Every year, the Celtic Cross that stands guard over Killegy is passed by thousands of locals and visitors on the busy Ring of Kerry road just beneath it. Although many may have glimpsed up at the Cross as they pass by, it is likely that few have stopped and strolled up the hill to the graveyard behind the Cross. The next time you pass, take 10 minutes to visit Killegy Chapel & Graveyard.