The runners, walkers and strollers of Killarney are truly spoiled for choice when it comes to picking their routes for taking to the fresh air to stretching the legs. If you have a preference for paved paths off the beaten track and away from vehicular traffic, then this scenic Knockreer Ross Castle 5 mile/8 km route through Killarney National Park is just what you need.

The route is largely contained within the Knockreer area of Killarney National Park, passing Ross Castle at the 5km mark. Knockreer is located right next to Killarney town centre and brings the National Park right into the town. On this route you will be distracted by scenic views and abundant wildlife and rewarded with peaceful surrounds. Despite its proximity to the town centre at one end and the ever popular Ross Castle at the other, you will have the place to yourself for much of the time in between.

All of the loop is within the boundaries of Killarney National Park and you will not meet any vehicular traffic on the route. Parts of the loop near Ross Castle can become busy during the summer months so be prepared to share the path at these points with walkers, runners, buggies and horse-drawn jaunting cars. At Ross Castle, there are public toilets available and during the summer months there is a snack shop and cafe . The Deenagh Lodge operates as a coffee shop during the months of April to October.

The route is open all year round but please note that areas near Ross Castle and the lake shoreline are prone to flooding when the lake rises after heavy rains. Although predominantly flat, there is a steady incline for the first 500 metres that is followed by a descent of similar distance. The final few hundred metres has a gentle rise to encourage you towards the end.

As with many of the routes in the Knockreer area, the best and easiest place to start is from the Deenagh Lodge.

Head Up The Hill

The Deenagh Lodge is located at the entrance to Killarney National Park directly opposite St. Mary’s Cathedral, about a ten minute walk from Killarney town centre. A cycle path and footpath along Mission road will take you directly there. Roadside parking is available on Port Road directly outside the entrance but this can be quite busy during the summer months or when services are underway in the nearby St. Mary’s Cathedral. You can find out more about the Deenagh Lodge in the post about the Circular Walk.

As this is a loop route, it is also possible to start and finish from Ross Castle. Although not as close to the town centre, there are a number of transport options to make the 3km trip from Killarney town centre to Ross Castle including taxi, shuttle bus or traditional jaunting car.

We begin at the Deenagh Lodge and get things started by heading up the steady incline at the rear of the Lodge. The first 2 km of the route follows the ‘Circular Walk’ loop before veering off towards Ross Castle. There is a steady incline up towards Knockreer House and Gardens. Knockreer House is located on the site of the original Killarney House which was destroyed by fire in 1913.

The house is now home to the Killarney National Park Education Centre, and some of the original walls and steps of Killarney House can be still seen in the Gardens. As you pass by Knockreer House and continue along the Circular Walk path, keep a lookout for the red deer as they often frequent this area.

The path soon opens up to the wonderful vista of Lough Leane and the McGillycuddy Reeks standing proudly behind it. It’s hard to believe that you only a few minutes from the busy road you left behind at Deenagh Lodge.

Crossing over the first of three cattle grids on this route is the point where you would branch off to join the Fossa Way trail. The Fossa Way would bring you along to a newer path that leads to the Castlerosse Hotel, Killarney Golf Club and ends at The Europe Hotel on the main Ring of Kerry Road. This is also one of the points where the horse trail meets the circular walk path. As you continue the gentle descent, the path levels out and begins to circle back towards our starting point.

Continue on through the second cattle grid and the Park opens up to the wide meadow known as Cotter’s field. You will often see the deer and the Kerry cows sharing the meadow here. As we approach a third cattle grid, prepare to turn right and follow the path towards Ross Castle.

Continue on the path to a bridge where you will cross the Deenagh river and take an immediate right along the riverbank. Follow the river as it flows towards its destination at Lough Leane. The path now turns to follow the lake shore for the next couple of kilometres. Stunning views over the lake and to the peaks of the McGillycuddy Reeks are to be enjoyed in the breaks of the tree cover. The path rises and falls with the shoreline and it can be prone to flooding during times of heavy rainfall.

Tip: The horse trail that follows close to the paved path is on higher ground and is worth trying if the main path is flooded.

As the path weaves along the lakeshore, look out for Innisfallen Island just offshore on Lough Leane. Around this point you will pass an old lime kiln before catching your first glimpse of Ross Castle across the water. This part of the route has very little shelter from the expanse of Lough Leane and can be quite exposed during windy weather. After passing over a small canal, turn right at the junction and you will soon reach the car park area of Ross Castle.

Ross Castle is justifiably one of the most popular areas in Killarney. The impressive ruins of the 15th century castle are perched on the lakeshore keeping watch over Lough Leane and the McGillycuddy Reeks. The Castle and its grounds are a great place to explore and there are also guided tours of the Castle from March to October. Ross Castle is also a great place to embark on a trip on the famed Lakes of Killarney. 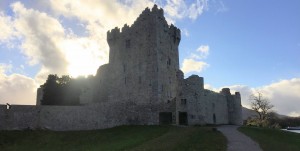 From the Ross Castle car park area we will now turn back around and retrace our steps back along the path towards Knockreer. Follow the path and continue past the junction to the lakeshore from where you originated. Continue straight on through the marshy land with a thick cover of Rhododendron for less than a kilometre where you now take the left turn to return towards Killarney. The path opens out again and you will see Killarney House in the distance on your right hand side. We now reach the bridge that we crossed earlier and cross the Deenagh once more to ascend the final slope before arriving at the Deenagh Lodge. 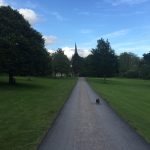 The Knockreer area of Killarney National Park is packed full of wonderful trails offering a variety of routes for runners and walkers to enjoy. This 5 mile/8 km loop is one favoured by many of the regulars in Knockreer that travel the circuit over and over again. The peaceful solitude and spectacular scenery en route ensure that it will retain its popularity for many years to come.