The Muckross area of Killarney is one of the most popular locations of the National Park and with good reason. On the Muckross peninsula that divides Lough Leane from Muckross Lake, the yew woodlands of Reenadinna are part of a truly special trail just a few kilometres from Muckross House & Gardens. 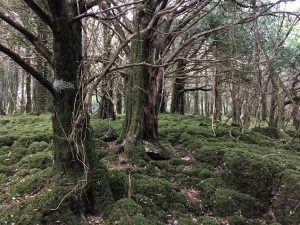 This is a 6km looped trail that takes you along paved paths with superb mountain and lakeshore views before heading into the woods that give the trail its name. Reenadinna Woods, or the Mossy Woods as they are also known, is the largest area of yew woodland in Western Europe. It is a Special Area of Conservation and trees within it are estimated to be between 200 and 250 years old. Outside of the woodland, the trail meanders along the lakeshore, rising and falling with the contours of the limestone rock underneath the paths.

As you leave Muckross House behind you, follow the signs for ‘The Meeting of The Waters, ‘Colleen Bawn Rock’ and ‘Dinis Cottage’. Proceed down the main avenue away from the House. In a few hundred metres, take a left turn following the same signposts. The path now veers around to the left. Watch out for more signs and keep left if in doubt. Soon the path straightens as you begin to head out along the Muckross peninsula. 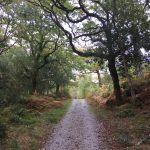 Off the Beaten Track

The wild heather and marsh land contrasts with the manicured lawns you left behind in Muckross House. After approximately 1km, you will see a forest path to your right side marked by the Millennium Forest signpost.  This will actually lead you to Reenadinna but it is best to stay on the main paved path and continue straight ahead rather than taking this short cut. Continue on the main path for another 2km, passing stunning lake views and the famous Colleen Bawn rock on your left-hand side. Shortly after the Colleen Bawn, you will see a woodland trail on the right-hand side of the path. Leave the main paved path here and follow this trail. This is the turning point on the loop and from here, follow the trail all the way until you arrive back at your starting point.

As you leave the paved paths to join the woodland trail, you get your first glimpse of Lough Leane through the trees. On this section, you really begin to feel the seclusion and isolation on this less beaten path. Soon, the track leaves the woods to open out to a parkland trail. Hidden in the trees on your right-hand side is the little-known Doo Lough. This small lake is jammed in between its larger cousins on either side of the Muckross peninsula.

The Mossy Woods of Reenadinna 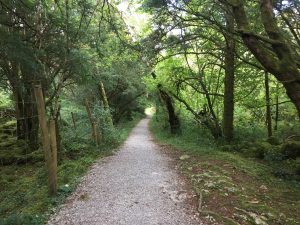 Due to the importance and sensitivity of Reenadinna, the trail skirts the edge of the woodlands but gives a great glimpse into the gloomy and dark recesses within. A prominent, two metre-high fence along the trail side is evidence of some of the conservation efforts in place. The fence attempts to limit the impact to the woodlands of the grazing sika deer.

The dense foliage of the yew tree restricts much of the light from entering the woodlands. This dark atmosphere hits you as soon as you enter the woods. It is also noticeably cooler and these dark, damp and cool conditions are ideally suited to the many mosses that cover the woodland floor.

The ‘mossy woods’ of Reenadinna create an eerie yet peaceful environment where only the birds seem to break the silence. It is like a scene from a different world – maybe parts of the next Star Wars movie will be filmed in the Mossy Woods instead of Puzzlewood! 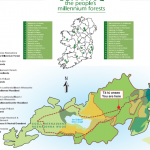 The special status of Reenadinna was recognised when it was chosen as one of the sixteen woodlands in Ireland to be included in the Millennium Forests project. This project was the largest ever project aimed at restoring native woodlands in Ireland. There is a very informative sign about the project on the trail side which is well worth a read.

Reenadinna woods are special in many ways. The ecological importance of the area is well recognised but it is much more than that. As soon as you enter the woods, the atmosphere changes. As the light fades and the air becomes more cool and crisp, you are very aware that you are entering a special place. The looped trail that circles the Muckross peninsula to get you there makes the brief stay in the woods even more enjoyable. If you go down to the Mossy Woods today, make sure to enjoy your time in that truly special place.

Read about some more great Easy Walks in Killarney National Park by entering your email address below.