Strickeen (Struicín) mountain is one of the more accessible mountains of the McGillycuddy Reeks. Rising just over 300m from the glacial valley floor of the Gap of Dunloe, it is an ideal introduction to the Reeks for the young or uninitiated. The well-worn track from base to summit makes for simple navigation for the majority of the route. A steady gradient throughout allows for a consistent pace on both the ascent and descent. Most impressive of all are the wonderful panoramic views that await you just a few kilometres from the valley below. Struicín means ‘little peak’ or ‘crested ridge’. In comparison to its better known and taller neighbours, it may be a ‘little peak’ but there’s a lot packed into its 440 metres. Strike out for Strickeen – the minimal effort required is well rewarded.

Strickeen is located in the famous Gap of Dunloe, just over 10km from Killarney town. Depart Killarney on the N72/Ring of Kerry road and watch out for a left turn for the Gap of Dunloe about 6km from Killarney. Kate Kearney’s Cottage marks the gateway to the Gap and it is here that most people start the ascent of Strickeen. If you don’t have a car, you can get to Kate Kearney’s via private transfer, shuttle bus, taxi or bicycle.

If you are driving, parking in the car park near Kate Kearney’s is the best option. There is ample space for parking here and it is less than 1 km from where the trail at the foot of Strickeen begins. There is some space for parking at the base of Strickeen, but it is a very narrow road so be warned that you may not be guaranteed a parking space there. 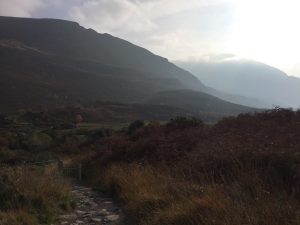 Start of trail looking back towards Gap

The short hop from Kate Kearney’s to the foot of Strickeen takes you in to the Gap of Dunloe along a winding rising road. The quiet solitude of the Gap will creep up on you the valley walls rise high above you on either side of the river. The starting point at the base of Strickeen is on the right hand side of the road and is marked by a small gate near a large boulder. From this point forward, the only way is up so follow the track and begin the ascent.

For the first 2 kilometres or so, the track rises gently but steadily with plenty of zig zag turns en route. As this is a popular route with walkers, hikers and runners, the trail shows plenty of signs of erosion. Caution is needed in wet weather, especially on the descent. Before long, the valley floor of the Gap is well below you and the first views of Lough Leane and Killarney become visible.

As you climb higher, the shelter of the valley fades and Strickeen suddenly becomes a mountain. A lone tree marks the last turn before you head for the peaty plateau that heralds the summit. 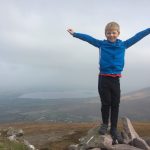 Summit with Lough Leane in background

As the path levels out, a small cairn marks the point to head right over the bog and marsh to make for the top of Strickeen. The mist can descend here very quickly so navigation can be a challenge for this last stretch. The final climb to the summit gives you marvellous views west towards the highest peaks of the McGillycuddy Reeks. The green fields of Beaufort stretch out beneath you and the expanse of Lough Leane behind you stretches out towards Killarney town.

The descent is simply a case of retracing your steps to the base of Strickeen. In between watching your footing on the way down, lift your head up to the skies occasionally. Strickeen is a great place to spot white tailed sea eagles and they are a joy to behold from this vantage point. Kestrels and ravens can also be seen wheeling around the skies at various points on the mountainside. 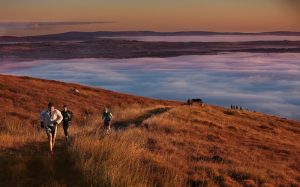 The popularity of Strickeen with trail runners and hikers is due in no small part to the annual adventure race that takes place around Killarney. The ascent and descent of Strickeen is one of the stages in the race and many have had their first experience of Strickeen as part of the event. Along with Torc mountain, Strickeen offers the best opportunity to see Killarney National Park from on high without too much effort.

The beauty of Strickeen is in its simplicity. A clear track that zig zags up the side of the mountain followed by a straight line across the marsh to the summit. But do not be misled by this simplicity, it is still a mountain and the weather turns quickly up there. I’ve seen people head up in their Sunday best and met others decked out like Alpine explorers. Somewhere in between these two extremes is probably the best option! Yet despite the relatively easy climb, the views as you near the summit are breathtaking. The sight of the towering peaks of the western Reeks will inspire you to explore further on these great hills. The views down to the valleys below remind you of the journey you have just made. As you arrive back at Kate Kearney’s Cottage, you’ll conclude that Strickeen is a ‘little peak’ that is well worth scaling.