One of the many great benefits of running is the fact that it gets you out and about in the fresh air. Going for a run in beautiful scenic surroundings is an added bonus that helps lift the spirits when you’re struggling to lift the legs. Killarney National Park is a runner’s paradise and has numerous paths, tracks and trails to suit all levels of fitness. These vary from flat paved routes to undulating woodland trails and upland mountain tracks. In this guide, we will show you 5 of the best 5k runs in Killarney National Park.These running routes are all relatively flat with some minor inclines/declines in some to get the blood pumping and the feet thumping. The Ross Castle route has some ups and downs but nothing too taxing. Ground conditions are good on the majority of the routes. Beware that during the winter months and after periods of heavy rain, the routes may not be fully accessible (especially Library Point). All 5 of the runs have car parks adjacent to the Start/Finish points.

Our choice for the best 5k runs in Killarney are summarised below. They offered varied landscapes on routes that are close to the town and skirt two of the famous Lakes of Killarney. Whether you are in Killarney for the weekend or you are living locally, there should be something here for you to entice you to lace up and get out there.

The looped circuit of Knockreer to Castlerosse through Killarney National Park is a wonderful 5km run that passes through open parkland, golf courses and along shaded riverbank paths. Two 19th century gate lodge cottages en route are joined by more modern additions of a children’s playground and an open air fitness park. The Knockreer area of Killarney is popular with locals and visitors alike and this 5km route is a great way to experience some of the magic of Killarney National Park quite close to the Killarney town. The start/finish point is at Deenagh Lodge, at the entrance to Killarney National Park on Port Road, directly adjacent to St. Mary’s Cathedral.

Killarney House is situated in the centre of Killarney. It is the place where Killarney town meets Killarney National Park. The entrance to the Park at Killarney House is a great starting point for this 5km run. Killarney house is located at the junction of Countess Road and Muckross Road, just a stone’s throw from the town centre. The route begins at Killarney House and follows the path towards the Deenagh Lodge at Knockreer. From here, follow the signs and pathways for the Circular Walk in Knockreer. The path rises up towards Knockreer House to where you will be greeted with superb mountain and lake views. As you descend to the parklands below, the path winds around towards the Deenagh River. Make sure to follow the riverbank path to find your way back to your starting point at Killarney House. 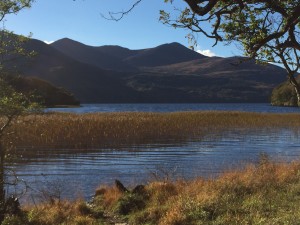 The beautiful trail that leads out to Library Point on Ross Island is an idyllic journey through woodland tracks and lakeshore paths. This 5km run follows some undulating paved paths before heading out along a trail through a wooded peninsula. A looped trail at the head of the peninsula skirts the cliff edges before returning through the heart of Ross Island to our starting point. Located Step out of the shadows of Ross Castle and discover a secluded and peaceful peninsula trail. The run starts and finishes at Ross Castle, just over 2km from Killarney town centre. 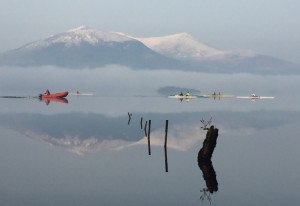 Muckross House is one of the top visitor attractions in the Killarney area. The nearby Muckross Abbey is situated on the shores of Lough Leane. This great 5k run takes you to both of these iconic locations and along magnificent lakeshore trails of Killarney National Park. The route is on paved paths throughout – although you do have the option of following a parallel woodland trail for some of the route if you wish. The starting point is at the entrance to Muckross Abbey on the N71 road approximately 3km south of Killarney town. From here you enter the National Park and begin your run through some of the most famous parts of Killarney National Park.

This 5km run through the paths and trails of Muckross Gardens takes you past carefully manicured lawns, lakeshore paths and through deserted woodland tracks. From the bustling environs of Muckross House to the base of Torc Mountain, this run packs a lot into its 5km distance. You will run along the shores of two of the Lakes of Killarney and see the peaks of the McGillycuddy Reeks rising above them. This 5k run starts and finishes in the main car park of Muckross House and Traditional Farm approximately 4km from Killarney.

So there you have it – 5 of the best 5k runs in Killarney National Park. There are plenty more where those came from and I’m sure you have your own personal favourites. Let us know in the comments below or share it on the Killarney Guide facebook page. OK, just one more so….

(Another) one of the best 5k runs in Killarney: Ross Castle & Copper Mines

One more for good luck, for the rainy day, for good measure. Whatever.

This 5k run starts and finishes at Ross Castle, just over 2km from Killarney town centre. The route is a figure 8 type loop of Ross Island, Ross Road and the Reen area of Knockreer. Head along the main Ross Road from the Castle and enter the National Park to your left after approximately 1km. Follow the path and take the first left again to bring you back towards Ross Castle. When you reach the castle again, continue straight ahead towards Ross Island. Following signs for the Copper Mines, the trail loops around to bring you back towards Ross Castle once more. A nice 5k run that has a good mix of parkland, lakeshore, woodland landscape and even roadside running mixed in!

Thanks for reading, please say hello and like us over on Facebook and Twitter and let us know about your running routes around Killarney National Park.