The beauty of this 5km running route in Killarney is that it is right in the centre of town yet it takes you through some of the finest areas that Killarney National Park has to offer.  As you travel around the route, you will pass two of the residences of the former owners of the Knockreer Estate.  Some of the current residents of Knockreer – a herd of native Irish red deer – can be seen at several points along the way. Scenic views, riverbank paths and open parkland are some of the other features of this popular 5km run. Despite its proximity to the town, there are parts of the route where you will have the path and the park to yourself, even in the busy summer months.

Killarney House is located within Killarney National Park, just a few hundred metres from Killarney town centre. Depending on your athletic prowess, it truly does lie within a stone’s throw of the hustle and bustle of the town. The entrance to the National Park at Killarney House is where Muckross Road, Countess Road and Kenmare Place meet at a small roundabout. The nearby Jarvey stand at ‘the Ha Ha’ and the adjacent Methodist Church are the landmarks closest to the gated entrance to Killarney House. At ‘The Golden Gates’ (although they are painted black), a gate lodge guards the pedestrian and cycle entrance – there is no vehicular access to the House and Gardens.

Head off through the gates and follow the path that runs by Killarney House. The House & Gardens were re-opened to the public in 2016 after a period of renovation. Originally the stable wing of a much larger residence (then known as Kenmare House) of the Browne family, earls of Kenmare, the House and Gardens are the ideal location to amble into the National Park from the town. 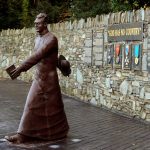 The first kilometre of the Killarney House 5km run follows a pathway that forms the boundary between the National Park and Killarney town. Here within the Park you are a world away from the hustle and bustle of the town over the wall. The pedestrian entrance on your right hand side leads out to the Monsignor Hugh O’Flaherty memorial statue.

As you exit the gardens of Killarney House, you will enter the Knockreer area of the Killarney National Park. Watch out for an entrance where jaunting cars and cyclists enter from Mission Road. As you proceed along the wooded path, listen out for the sounds of the Deenagh River up ahead. On your left hand side are the open meadows of the Half Moon field. This area of Knockreer served as a home for many years for the Killarney Athletic soccer club as well as being an unofficial training ground for the footballers of the nearby St. Brendan’s College. It was also to be the venue for the ill-fated Killarney Festival of Music & Food in 2015. 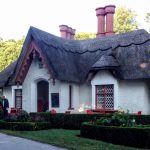 Follow the path over the bridge and head up the hill towards the Deenagh Lodge cottage. The Deenagh Lodge is located at the entrance to Killarney National Park directly opposite St. Mary’s Cathedral. The distinctive, thatch-roofed lodge is home to a lovely coffee shop which provides refreshments during the summer months.

The Deenagh Lodge is also an alternative start/finish point for this 5k run.

At this point, head along the path that rises up the hill, following the signs for Knockreer House & Gardens.

There is a steady incline up towards Knockreer House and Gardens. This pathway is part of the Circular Walk although we are going the opposite way to the signposted route. This gets the climb out of the way early on in the run!

Knockreer House is located on the site of the ‘original’ Killarney House which was destroyed by fire in 1913. Known locally as ‘The Mansion’, it was home to the Browne family, earls of Kenmare. Some of the original walls and steps of the House can be still seen in the Gardens. Knockreer house is now home to the Killarney National Park Education Centre. As you pass by Knockreer House and continue along the Circular Walk path, keep a lookout for the red deer as they often frequent this area.

The path levels out at the back of Knockreer House and turns a corner to open up to the wonderful vista of Lough Leane and the McGillycuddy Reeks including Ireland’s highest mountain, Carrauntuathail. It’s hard to believe that you are just a few minutes away from the busy town you left behind at Killarney House.

Crossing over the first of three cattle grids on this route, you begin the steady descent through the open parklands of Knockreer. If you haven’t already come across any deer by now, look closely around you as you head across the open parkland. If you are visiting in late September or October, this is one of the best places to observe the Red Deer rutting season in close proximity. Be very careful during rutting season and make sure to give the deer a wide berth if they come near the path.

As you continue the descent, the path levels out and starts to circle back towards our starting point. Continue on through the second cattle grid and the Park opens up to the wide meadows at Cotter’s Field. 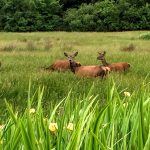 Here the meadows are shared between the deer and the herd of Kerry cows of Killarney National Park. At the third cattle grid, we reach a crossroads and here we will take a right turn on the pathway towards Ross Castle.

Continue straight along the path towards the river Deenagh. Cross over the bridge and take an immediate left to follow the riverbank path. This pathway will lead you back towards Killarney House & Gardens. Before long you will see the bridge you crossed earlier when heading towards Deenagh Lodge. Don’t cross the river – stay on the path and continue straight ahead to re-enter the gardens and finish your Killarney House 5km run. Ideal for an early morning outing, a lunch time jog or a summer evening run around Killarney National Park, this is a great 5km run that on the doorstep of Killarney town.

Check out some more of the best 5km runs in Killarney here.