The Knockreer and Ross Island Loop in Killarney National Park is a superb 10km route close to Killarney town. Whether you are a runner, cyclist, hiker or a stroller, the route has something for everyone; stunning views, historic sites and nature at its finest. This trail boasts the convenience of a starting point close to the town centre but also provides a varied landscape with great opportunities to observe nature at close quarters along the way. If you’re looking for a great 10k run or a beautiful walk through Killarney National Park, this route is one of the better options available in the Killarney area. Photo opportunities present themselves at several points along the way and you’re never too far from civilisation if you need to get back to the town.

Killarney National Park has numerous attractions and activities that have been attracting visitors for hundreds of years. The Knockreer area is a firm favourite for both locals and visitors alike. Its proximity to Killarney town centre makes it one of the most popular areas to access the National Park. It is also a great place to link to other parts of the Park such as Ross Castle, The Fossa Way, Killarney House and the children’s playground. The well-signposted paths and trails throughout the area mean that map reading skills are not a necessity for exploring the area. In most cases, the paths are paved well maintained – although parts of the paths close to the lakeshore near Ross Castle and Ross Island can become flooded during the winter months or after some heavy rain. Knockreer also provides a superb and convenient location to get up close and personal with some of the celebrated wildlife of the Park. The most spectacular example being the Red Deer rut which occurs in late September and October each year.

As with many of the routes in the Knockreer area, the best and easiest place to start is from the Deenagh Lodge. 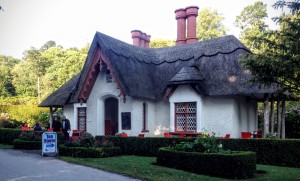 This is located at the entrance to Killarney National Park directly opposite St. Mary’s Cathedral, about a ten minute walk from Killarney town centre. A cycle path and footpath along Mission road will take you directly there. Roadside parking is available on Port Road directly outside the entrance but this can be quite busy during the summer months or when services are underway in the nearby St. Mary’s Cathedral. You can find out more about the Deenagh Lodge in the post about the Circular Walk.

As this is a loop route, it is also possible to start and finish from Ross Castle. Although not as close to the town centre, there are a number of transport options to make the 3km trip from Killarney town centre to Ross Castle including taxi, shuttle bus or traditional jaunting car.

The environs of Knockreer and Ross Island have provided ideal running routes for 5k, 10, triathlons half marathons and other fun runs and charity walks throughout the years. The Killarney Lions club regularly uses this route for its annual fundraising run. In recent years the Hardman triathlon and Ironman race has followed some of this route for part of its event. Many local and visiting runners will be seen jogging around sharing the paths with the walkers, hikers, strollers and cyclists enjoying the National Park.

From the Deenagh Lodge, continue straight on into the heart of Killarney National Park. Follow the path as it slopes gently down the hill. 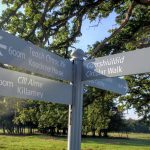 Continue straight on at the first junction of the path, following the signs for Ross Castle. (Note: A right turn here will take you on the Circular Walk or on towards the Castlerosse Hotel or Killarney Golf course. As we follow the path, look out for some of the red deer in the meadow to your right. This path is also quite popular with the jaunting cars during the busy summer months so watch out for oncoming traffic!

As you cross the Deenagh river for the first time, continue along straight and you will have completed your first kilometre of the route! Keep straight along here (following the signs for Ross Road) and you will shortly be at the junction where the National Park exits on to Ross Road at Bunrower. From here, turn right and head along the main road towards Ross Castle. Maybe stop to gather your thoughts at the wishing well on the roadside at this junction.

Ross Castle is justifiably one of the most popular areas in Killarney. The impressive ruins of the 15th century castle are perched on the lakeshore keeping watch over Lough Leane and the McGillycuddy Reeks. The Castle and its grounds are a great place to explore and there are also guided tours of the Castle from March to October. Ross Castle is also a great place to embark on a trip on the famed Lakes of Killarney. Traditional open boats will take you to nearby Innisfallen Island or further afield to some of the many great locations dotted around the Lakes. It also the traditional end point for the boats returning from famous Killarney day tour. This day trip begins with a journey through the Gap of Dunloe on foot, jaunting car or bicycle. The second half of the trip comprises a boat trip through Killarney’s three lakes and concludes at Ross Castle. If the open boat is not your cup of tea, there are also options for a trip on a covered waterbus around Lough Leane. The tour operators leave from the pier at Ross Castle at regular intervals and the trip takes about an hour.

As you arrive at Ross Castle, proceed straight on past the car park and over a small bridge to take you on to Ross Island. Keeping Ross Castle on your right hand side, set off on the trail that leads off to make a loop of Ross Island. The Ross Island trail is a gentle, rolling, paved path that weaves around the island. You will catch glimpses of Lough Leane at several junctions as you heard around.

At the first junction, continue straight ahead following the signs for the Copper Mines. About 4km into this route you will reach the site of the Copper Mines of Ross Island. The mines date back to approx 2500 BC and traces of mining activity are dotted around the area. One of the abandoned mine shafts is visible at the edge of the trail. As you leave the lakeshore at the Copper Mines, the trail begins to turn as it heads back around toward Ross Castle.

Soon after, watch out for a left turn (signposted for the Governor’s Rock and Library Point). The Governor’s Rock is not too much of a diversion; Library Point however will take you off the trail a bit. So if you are planning to stop off at these points, be sure to add some time to take these in. Both points offer tremendous viewing points of Lough Leane, the McGillycuddy Reeks mountain range and Innisfallen Island.After you pass the turn off for Library Point, you will soon rejoin the trail that brough you from Ross Castle. As you return towards the Castle, you will have passed the 5km mark, so you’re on the home straight now! 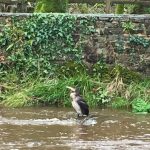 The return journey will take you directly through Killarney National Park. Head past Ross Castle on your left hand side, cross over the canal via a wooden footbridge and continue straight to join a path that will bring you back to Knockreer. Less than a kilometre after you leave the Castle behind, take the first left turn. If you miss this turn, don’t worry, the path will still take you back to your starting point but you will have shortened your journey by a few kilometres.