“The MacGillycuddy’s Reeks: People and Places of Ireland’s Highest Mountain Range” is the spectacular new photographic book by award winning photographer, Valerie O’Sullivan. “The Reeks…” is O’Sullivan’s latest book and chronicles the raw beauty of the mountains and valleys of the McGillycuddy Reeks and those that inhabit the area. 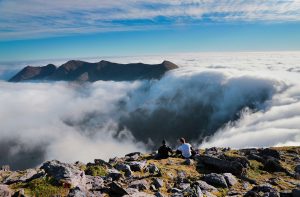 The peaks of the McGillycuddy Reeks mountains rise high from the Iveragh Peninsula in Co. Kerry. Many have walked and climbed these slopes and many have photographed the superb views on offer. In this book, you will see breathtaking images of the mountains and valleys that bound Killarney National Park.  Yet this is much more than a ‘pretty pictures’ tome – though the images are marvellous and inspiring throughout – it is a record of the way of life in a unique place that will serve as a historical account in years to come. The endless stream of wonderful images will catch the eye, but behind the great photographs you will find a treasure trove of stories and insights from the Reeks.

The valleys and lowlands of the area may lie in the shadows of the great peaks but it is within these shadows that O’Sullivan shines a light.  The book superbly captures everyday life and revered traditions of the rural communities dotted throughout the area.

Those scaling the heights are not neglected though, an equal proportion of the book is devoted to those who work and play on the peaks and slopes of the Reeks. Thousands are drawn to the Reeks each year to summit the mountains and experience the wonders of a day in the hills. The mountaineers and hillwalkers have been joined more recently by more adventurous types. These rock climbers, kayakers and adventure racers are all captured beautifully in scenic shots. One of the pioneers of mountain running in Ireland and ‘King of the Reeks’, John Lenihan is featured prominently. O’Sullivan previously contributed some spectacular images in Lenihan’s biography ‘Tough as Leather’.

It is evident from many of the shots that O’Sullivan is equally adept at mountaineering as photography. Patience is a virtue required for photography. For this book, stamina and a head for heights are equally important! 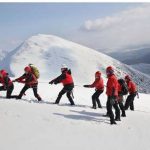 The release of the book coincides with the 50th anniversary of the Kerry Mountain Rescue team, yet this is no co-incidence. The great work of this team of volunteers is covered in a chapter of the book and a significant proportion of the proceeds will be donated to the team. An account of the team’s work in its formative years is described in the book:

“One of the team’s most notable first call-outs was an epic all-night mountain rescue in 1967…. The team endured horrendous conditions of pelting rain and gale force winds, continuing to work for eight hours to bring the stretcher to the foot of Carrauntoohil, and a further three hours to meet the ambulance. The brave rescuers had spent a total of nineteen hours on the mountain, without food or sleep.”

These days, the sight and sound of the Coast Guard helicopter heading for the Reeks is a reminder of the dangers that lurk on the mountains. Included in the book are spectacular images of winter training exercises by the emergency services on the snow covered Reeks. 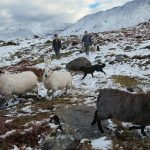 Anyone who has visited Killarney will have experienced the McGillycuddy Reeks. Even if you have not climbed the mountains or traversed the valleys, the Reeks form the backdrop to Killarney town. O’Sullivan’s book takes you closer to the Reeks in every sense. Flicking through the pages feels like walking the slopes, reading the stories feels like sitting in the kitchen with the locals. Although the magnificent images are worth the price of admission alone, it is this ability to provide a true insight to the area that makes the book even more special.

It is clear from the book that the author has a great love and appreciation for the area and its inhabitants. The Reeks cast a spell on many that visit and O’Sullivan has not escaped this enchantment. Tangible proof of this respect is evident in the fact that a significant proportion of the proceeds of the book are being donated to the Kerry Mountain Rescue team.

As the book title suggests, this collection of stories, images and observations is as much about the people as it is about the places. The places around Ireland’s highest mountain range are majestic, wild, peaceful, treacherous and raw in equal measure. The people that live in the shadows of the great peaks are the ones that know these places best. Valerie O’Sullivan has done a great job of capturing the essence of both in this wonderful book.

“The MacGillycuddy’s Reeks: People and Places of Ireland’s Highest Mountain Range” is available in all good bookstores or directly from Amazon here.

Valerie O’Sullivan is a photographer and videographer based in Killarney. She works with Fáilte Ireland and various outdoor events. A regular contributor to the Irish Farmers Journal, Irish Examiner and The Irish Times, she has won four national awards in the Annual Press Photographers of Ireland competition. www.valerieosullivan.com.

*All images copyright of Valerie O’Sullivan.