Many of the treasures of Killarney National Park are world-famous and Ross Castle is one of the best loved of these. The labyrinth of paths and trails that criss cross the adjacent Ross Island may not share the fame of the Castle and its grounds, but they are worthy of a visit in their own right. The most direct and easily accessible of these is the Copper Mines trail. 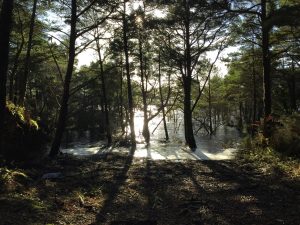 Ross Island could be more accurately considered a peninsula, its island status is bestowed upon it courtesy of a man-made channel close to Ross Castle. The island consists of over 150 acres of woodland with hundreds of inlets and bays on the shores of Lough Leane. There are 3 kilometres of paved paths that circle the island along with many more woodland tracks and trails along the lakeshore.

Like many others that visit Ross Castle, I was blissfully unaware for years about the paths on the nearby Ross Island. Only in my teenage years did I unearth some of the wonderful weaving trails that circle the island.

Perhaps the best loved and most direct of these trails is the Copper Mines trail – a peaceful 2km looped trail on paved paths on the south western shores of the island. In the shadow of Ross Castle, are the woodland trails around the old Copper Mines of Ross Island. Mining activity in the area dates back over 4,500 years with activities ceasing in the mid 19th Century. Today, rather than copper ore, the trails offer peace and solitude along the shores of Lough Leane.

How Do I Get There 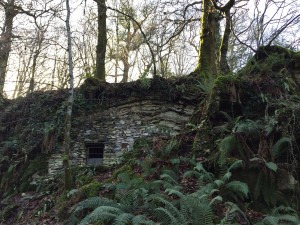 The adjacent Ross Island is packed with beautiful tracks and trails, viewing points, secluded bays and historical points of interest. Ross Island is separated from the ‘mainland’ by a small man-made channel that passes under the bridge that you cross to get to Ross Castle.

The paths on the island do not allow motor vehicles so it is an ideal place for a stroll, hike or jog. Bicycles and buggies are well suited to most of the paved paths. There are some minor hilly sections but none are too taxing. Parts of the island trails are woodland tracks in places so sturdy wheels will be required when leaving the paved paths. Take it easy going downhill as you could meet a walker, jogger or a four legged friend around the next bend.

The Copper Mines Trail of Ross Island is a loop of approximately 2km starting and finishing at Ross Castle. The circuit can be combined with the Library Point or the Governor’s Rock trail to extend the length to over 5km.

The Copper Mines trail starts beside Ross Castle where the wheels and frame of an original mining cart are positioned on a stone plinth. The trail has information boards en route as well as numbered markers describing the points of interest on the trail. An accompanying booklet is available from the information office of Ross Castle which is open during the Summer months. However, you don’t need a booklet to enjoy the beautiful trail. It is well signposted all the way around.

Tip: For those of you that want to venture off the paved paths, there is an alternative route that you can take to get to the Copper Mines. As you leave Ross Castle and pass the mining car behind you, watch out for a barely visible path into the woods on your left – just before the path begins to rise.

From here, follow the tracks through the woods, over some stepping stones and up over the brow of a hill until you reach a woodland trail just above the lakeshore. This path hugs the shoreline all the way to the Copper Mines. It runs alongside the main paved path and is an interesting alternative route. Please note that uneven ground, some fallen trees and other obstacles await you on this alternative trail. 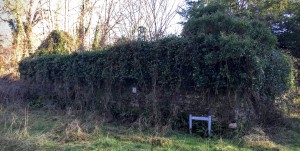 The first noticeable landmark you encounter is Ross Cottage which lies in ivy-covered ruins by the side of the main path. It is here that the famous poet Shelley is reputed to have spent some months during the 19th century.

The undulating path continues along until you arrive at a bench overlooking Lough Leane. Mangerton mountain and the Horses Glen rise up in the distance to the east. You will soon reach a junction where the signpost points towards Governor’s Rock to the right.

Continue straight ahead, following the signs for the ‘Old Mining Trail’. There is an option here to follow the woodland path to the left which will also lead you to the Copper Mines. This is actually the original path used to transport the carts to and from the mines. Please note that this path can sometimes be prone to flooding during the winter months of after heavy rainfall.

The Copper Mines are situated in a beautiful bay opening out to Lough Leane. A stony shoreline opens up on a spectacular vista of Torc and Mangerton mountains beyond the southern shores of the lake. This part of Ross Island has seen mining activity take place as far back as the Bronze Age right up until the 19th Century. If you peer over the low wall into one of the flooded mineshafts known as ‘The Blue Hole’, you will see the green hue of the water is still evident. 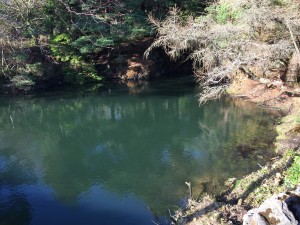 As the path veers to the right, and old dam wall to the left bears testament to the reason for the ultimate downfall of mining activity in the area. The proximity to the lakeshore led to constant flooding of the mineshafts throughout the centuries.

A few hundred metres further on the trail, look out for a path into the woods on the left hand side. Follow this trail down to where you will see the entrance to one of the original mine shafts. An information board here gives an artist’s impression of the mining activity in days gone by. Take care here if you are with small children or pets as there are still some open holes in the area. When the lake level is high, the water of Lough Leane often comes up to the edge of the entrance. 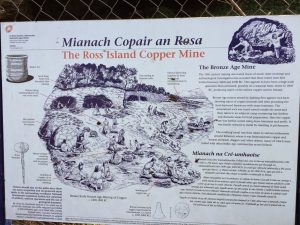 The main path now begins to circle around back in the direction of Ross Castle. Soon you will come to a junction that is signposted for Governor’s Rock to the left or Ross Castle straight ahead. Continue straight ahead, keeping an eye out for another stone wall to the right side of the path. This wall protects a drop down into another one of the disused mineshafts. Before long you will reach another junction that returns you to trail that leads back towards Ross Castle.

The history of the mines is described in detail on several information boards along the mining trail. This covers the mining activity from 2,000 BC right up the 19th century when the mines were finally abandoned. An extensive Torc was carried out on Ross Island in the early 1990s. A more detailed history of Ross Island can be found in William O’Brien’s book: Ross Island: Mining, Metal and Society in Early Ireland (Bronze Age Studies)

The Copper Mines trail is the most direct and accessible of all the tracks and trails on Ross Island. Beautiful lake views and secluded woodlands on historic paths make this an excellent choice for a brief trip around Ross Island. So the next time you are in Ross Castle and you’re looking for a place to have a picnic, or maybe you’re waiting for the next boat to go out on Lough Leane, take a stroll or a jog out to the Copper Mines of Ross Island. 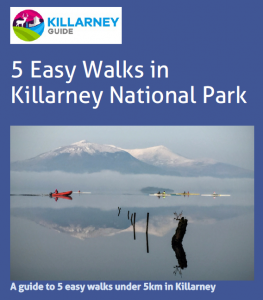 If you like the Copper Mines trail, you might want to check out some more easy walks in Killarney National Park here.

4 thoughts on “The Copper Mines”